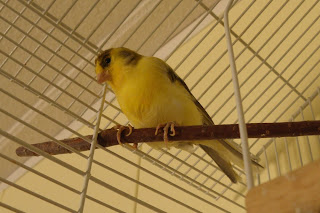 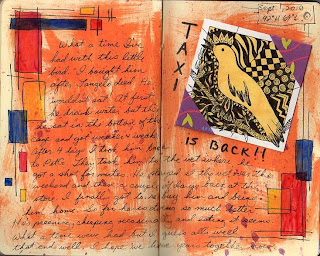 I got a new bird yesterday. Actually I got him a little over a week ago but when he didn't eat for 4 days and was sitting on the bottom of the cage, not even on his feet, I took him back. I was so happy to hear they'd take him straight to the vet. We hear such awful stories about the treatment of animals in stores and mills. When I called back later the manager told me the vet thought he'd make it and it was mites that were the problem. She said she'd put my name on him when she got him back so I could rebuy him. Then she took ALL the canaries for treatment. This was at PetCo so they really do take care of the animals.

Because I missed him after I took him back to the store I made a Zentangle with him. Now that I've got him back I made a journal page that I had pre-prepped with paint, about him. The zentangle is there rather than his picture. Now that I think about it, I should have had both picture and zentangle. Oh well, I guess I'll have to do another page sometime.

By the way, he is doing great now. He's hopping all over the place, eating the veggies I put in the cage and his seeds. He's even done some chirping. Cross your fingers he stays this way!

Helena ( Creating a Likeness )offered to make me some photo corners and I thank you for the offer Helena. As you can see, I made a couple for this picture and they are much larger than the punch cuts out. I appreciate your offer so much though.
Posted by Timaree at 11:36 AM