Art All Around Us

Hello! We've had rain. Drats, I should have taken pictures of the water rushing over the edges of the gutters and my backyard puddling so my feet got wet when I walked the dogs out there (had to go out with them because they DID NOT want to walk in the big puddle). Ah well, no pics but just think of a good, hard rain coming and going for a few days and you'll have the picture. It was badly needed and doesn't put but a dent in the drought we are in but it was a good start!

I do have some pics for you though. This first one was for fun. I'd bought the pears with the intention of drawing them prior to eating them but they were getting eaten first so I finally drew the last one before it was gone. 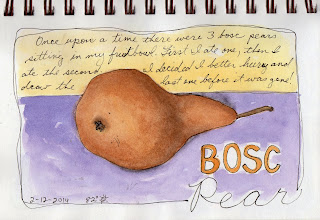 These next two pictures are from my granddaughter's birthday. She loves animals so horseback riding was a great choice for her. Would you believe it costs $50 an hour per person? That sounds like so much to me but I am getting a bit older and out of touch with things like that. I remember when Disneyland cost $8 for a whole day! At any rate, she enjoyed the ride which I didn't go on.

Instead, I drew one of the horses waiting at the fence. I drew it with a Tombow pen and then added watercolor. Tombows bleed when they get wet so it can hurt or help a picture. (They are really good when you want to work with just one color but want a bit of shading). The other pic is small photos of her day with the background made of the gift wrap taken from her gifts after they'd been opened. 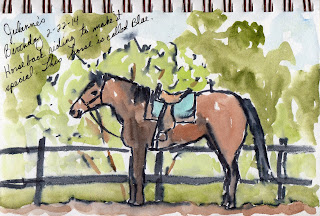 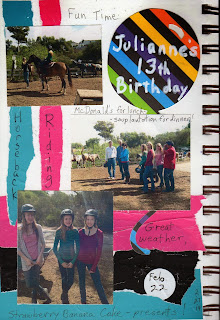 These next two pics are from an article someone shared with me on Facebook by David Rankin ( http://davidrankinwatercolor.macmate.me/David_Rankin_Watercolor_Site/Faces_files/Sketching%20Faces%20Faster.pdf ). I tried his generic eye and then went on to a face in my Vegetarian Times magazine which my son gave me a subscription to (thanks James) and from that to my great nephew's face on Facebook because he looked so happy to be spending a day with his dad at the Army base starting with breakfast in the chow hall. I need a lot more practice both with getting his method down and with skill but I was actually pretty happy with these quick drawings. Since I made the lady's face too wide I overcompensated and made my nephew's face too thin and I need to keep to the pencil rather than a ballpoint pen for starters. 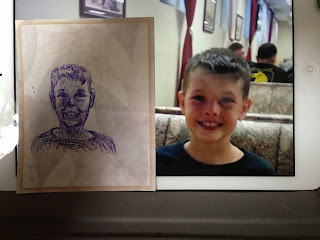 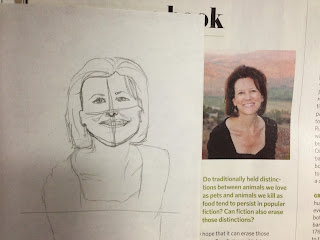 My granddaughters don't think they have the art gene but as you can see in this next picture, they do! I wanted my nails done and told them they could do anything they wanted. They know I like color so this is what they came up with. I was happy with it and it lasted for just over a week (it's time to get the remover out for sure now - gardening and doing dishes is not conducive to keeping manicures nice) 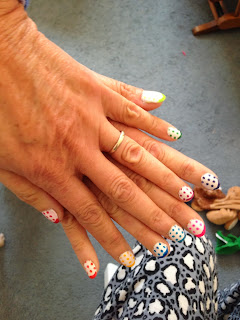 And lastly, I made some potato bread a couple of days ago. I save leftover potatoes in the freezer just for this as it makes a more moist and longer lasting bread and this is also why I never put pepper in my potatoes! I've eaten 2/3 of one loaf already and the other is sitting in the freezer to keep it fresh till my husband feels like eating some. Can you believe he doesn't feel the urge to gobble it up when I bake it? I mean, how can anyone resist fresh bread? 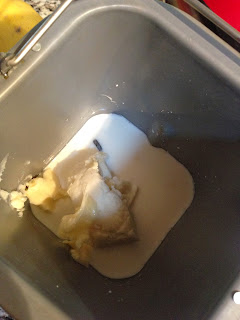 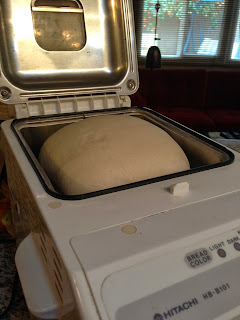 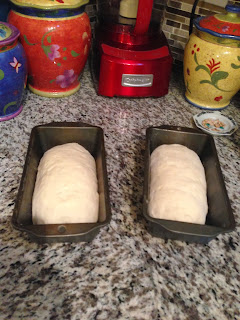 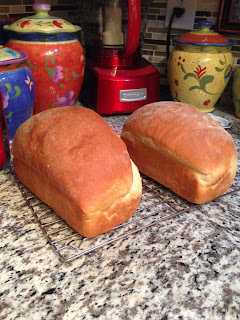 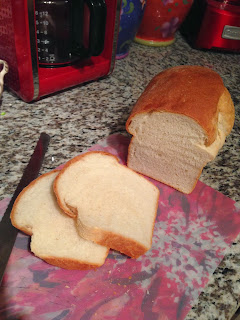 Well, that wasn't the last thing afterall. Here is the ballerina picture I bought from Jennifer Edwards all framed. It was hard to get a good picture due to the mirror-like frame but I was very happy with how it turned out! 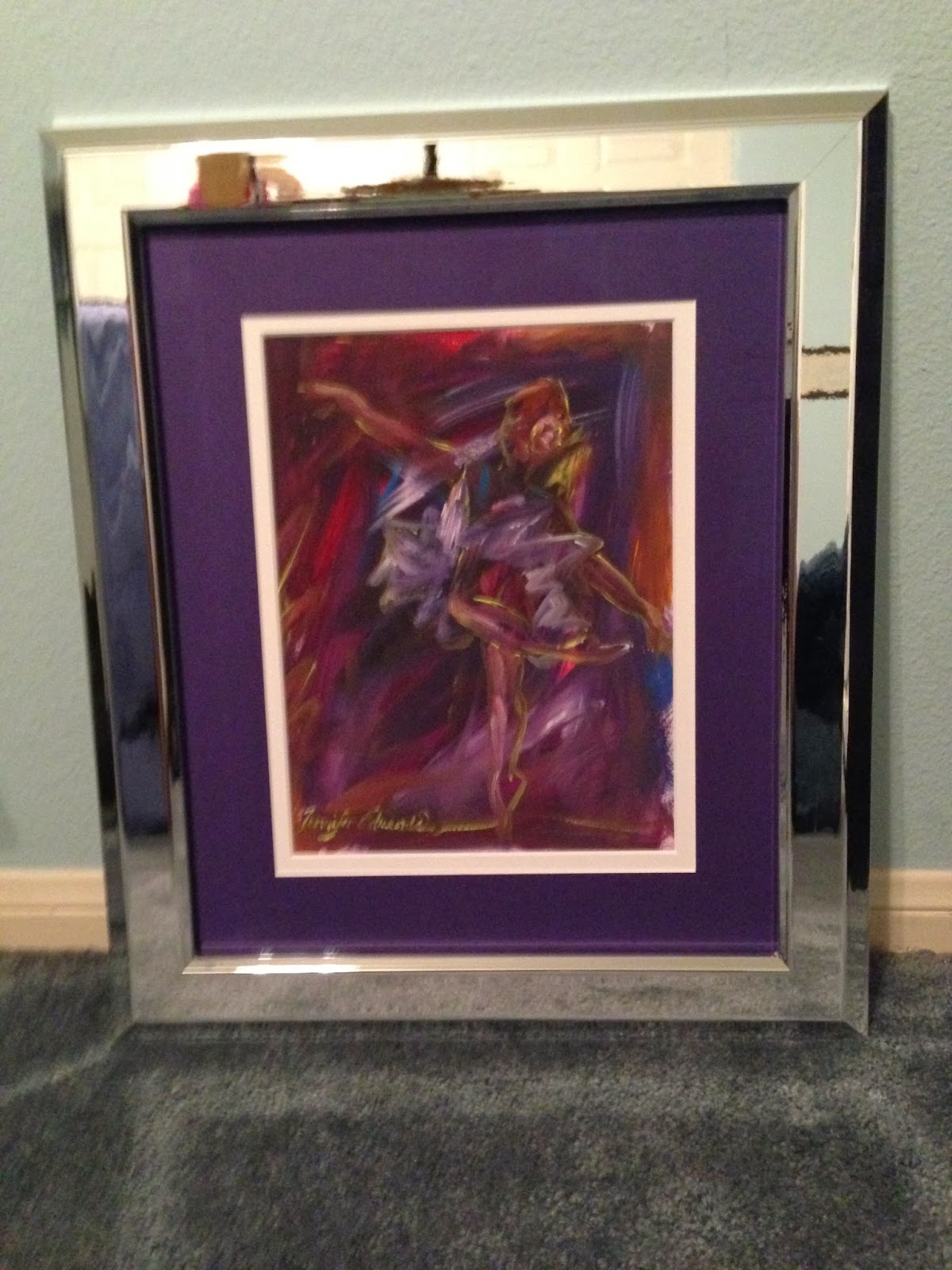 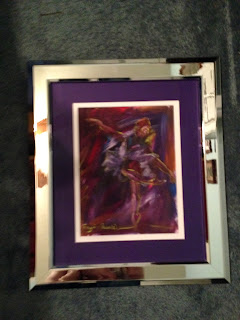 
I added new knobs from World Market to my kitchen cabinets! There are two of each kind except for one (due to an odd number of cabinets) so it looks pretty much like all different ones but if I ever find cobalt blue or bright red ones I may change a couple out. I like this so much better than all the same since the kitchen doesn't have a lot of it's own color but they don't stand out and shout "Look at me" either. 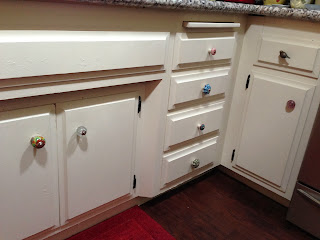 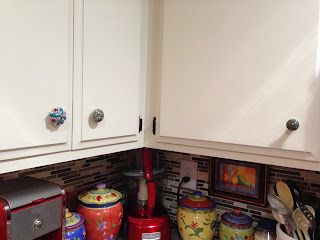 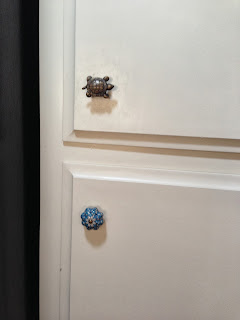