Sambo and another Portrait 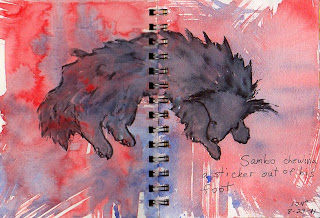 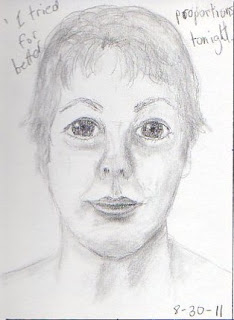 Still keeping busy with artstuff. I had put the background to Sambo in ahead of time. It's acrylic so watercolor wouldn't work well and I didn't feel like using gouache or collage so I used the Tombow pen to draw my little black poodle-chihuahua mix. I like how he turned out. I guess I could have drawn him larger but it's okay this way. At least I got him down before he moved! Getting faster with my sketching and that's a good thing when you try to get an animal down without using a photo.

The other is portrait number 9. I'm really slow at doing these. The challenge was to do one every day during the month of August but I've changed it to doing 30 no matter how long it takes! I'm pretty happy with this one although once again, it doesn't look like me or the other portraits! My eyes are too big but at least I got the head shape better. And the nose is better too! Wish it looked like me though!

Everyone ready for fall to come? I've had enough of this summer between snakes and the heat. I think everyone has had lots of heat this year and many of you got Irened too. I hope all of you did okay through her rage up the East Coast.

Mojave Green and Some More Self-Portraits 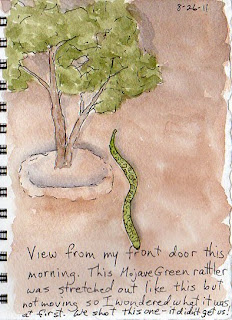 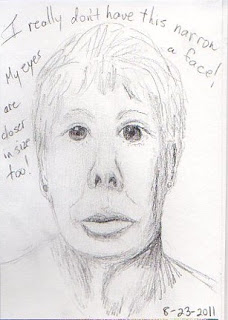 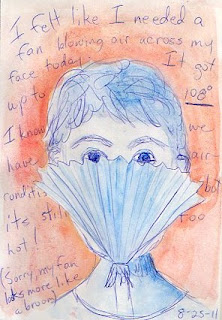 Oh, we had some excitement around our house this morning. Not good excitement either. I looked out about 15 minutes after I'd let two of our remaining dogs outside and this is what I saw. At first I couldn't believe I was seeing what I was so I called my husband over and he confirmed it. Another snake! This is a Mojave Green rattler which has two kinds of toxins, one for the muscles and one for the nervous system so the vaccines and antivenoms don't work well if a dog gets bit. Very, very dangerous. This one had 7 rattle buds so it was quite mature. At least we got this one before it got another of our dogs!

The other pictures are part of my ongoing self-portrait series with Violette
. I am not happy with my monkey face at all. My face needed to be out as far as the hair edges and then hair added beyond that. It would have made a lot of difference. Also, I think I have to watch the angle at which I hold a handheld mirror as it changed perspective on me and not for the better! Ah well, it's a learning process.

The second, blue and orange picture was done in ball point pen with watercolor added. I was trying to stay cool yesterday which I can as long as I stay indoors with the air-conditioning but it was 108 degrees outside. The official temp is never as high as we seem to get but we have three thermometers outside that all say the same thing. They are two different brands and in three areas of the yard so can they all be wrong? I think not. These were portraits nos. 7 and 8. I am quite a bit behind but that's okay with me. It's the journey, not the speed that counts here.

Hope you have happy events in your day!

Portrait Number 4 and a Journal Page 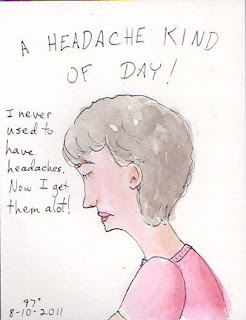 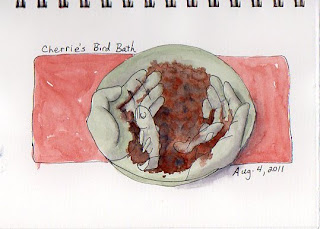 Portrait number four was done without looking at a reference. I just felt bad and drew that. I think it comes across! Hope you all felt better today than I did.

The birdbath is my sister's. She's moving to Japan to live with her son since she just can't make it in California on Social Security and a part-time job. She's only taking small items with her and although she loved this birdbath, it's too heavy to ship so I drew it. I wish I'd left the writing off so I could make a print for her. When I get refreshed on PSElements I might erase the lettering and print it out. 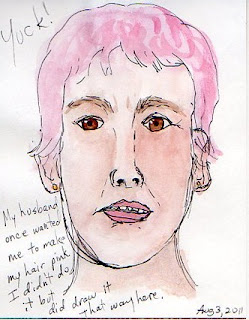 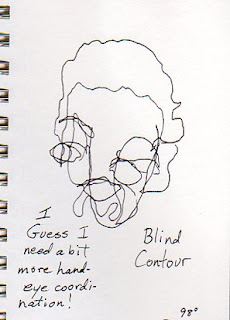 I've been visiting my sister who is leaving to live in Japan and went to my son's pot party (we all took clay pots to welcome him into his new home) so I got a bit behind but I'll keep working at these. Here are nos. 2 and 3 with neither being good and both worse than day 1. I guess you could call me a glutton for punishment but I really am hoping to learn something from doing these.

Now off to catch up a bit with my newest Imaginary Trip with Laure Ferlita which is a trip to Italy! Ciao!
Posted by Timaree at 7:58 PM 7 comments: 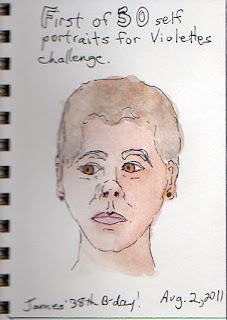 Violette
is having a challenge over on her blog for 30 days of self-portraits. She's asking us to let everyone know in case they'd like to practice drawing, drawing faces or whatever. So now you know why I did the picture here. I haven't done many faces so I figure 30 of them will help my drawing them. We'll see won't we? Want to join me? They don't have to be lengthy sessions or realistically done. Want to scratch one out with a pencil in 5 minutes or paint one or do a cartoon? It's all okay. So come on! Join in with me.
Posted by Timaree at 7:11 PM 7 comments: