Getting Some Things Done 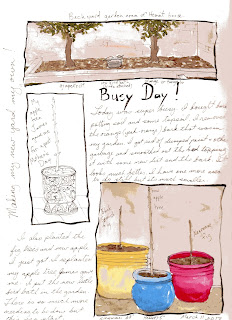 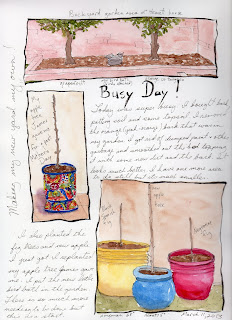 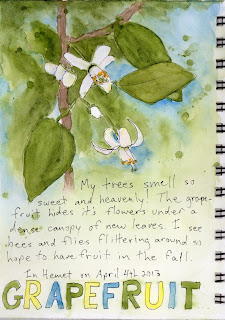 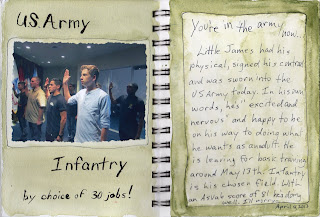 I've been busy going from one house to the other working on both either cleaning up to sell the one or planting flowers and veggies in the new one.  I'll be leaving for a week to the old one again and sure hope the plants can handle it without being watered.  I have taken some time to do some journaling though and these pics are what I've done.

You've seen the first picture already.  I only posted it so you could see the difference with the finished version which is the second posted picture.

The grapefruit page is one half of a spread.  I finished this half but still need to paint the tangelo half.

The last picture is a spread I did when my grandson enlisted in the army.  He looks so young!  I remember dating sailors his age and thought they were men!  I was all of 16 at the time but now at 59 I am seeing things quite differently.  Although I personally didn't want him to go into the military since we always seem to be at war anymore, I am happy for him as it gives him a direction to go for his life and college was not working for him - he does not do standard education well (he consistently gets D's and some F's yet scored extremely high on the military admittance test and has tested well on California state tests - he just can't do the paperwork for the classes). My brother-in-law, a retired Army officer says the army uses words, sight and hands-on teaching so my grandson will do just fine.  He wanted infantry and has a cousin he could find himself serving under perhaps which could be good and bad so we'll see what happens if it even comes up.  My dad was in the infantry during WWII so we now have a 3 generation tradition going (not that just being in the military isn't one for my family already with my grandfathers in the cavalry, my mother and sister marines, my husband retired from the navy and my brothers-in-law and son retiring from the army or having served in the navy). I just hope he likes it.  Actually it makes a great career path for him as long as we stay peaceful as a country for a while!