Are You Being Watched? 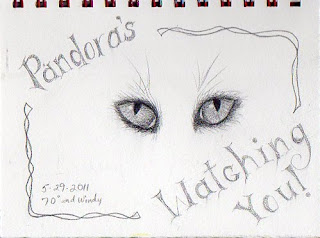 My kitty was sitting beside me while I played a game on the computer.  I dropped the game and picked up a pencil to see how much I could draw before she moved.  Well, I got most of her eyes done and then she was gone.  Still, it made a nice page.  I went back in and added color to the eyes.  I don't know which way I like the drawing better.  What about you? 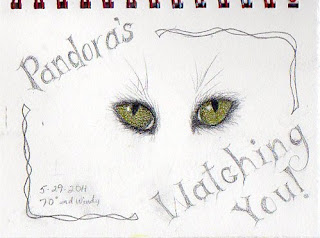 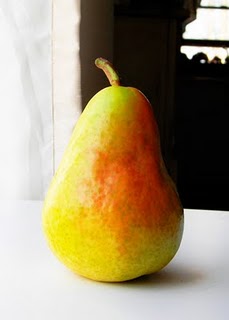 Hi everyone.  Ann Nemcosky of Blue Bird Hill blog is offering a tutorial on colored pencil drawing.  I've told her I want to follow along.  She's asked to see where we'll be posting our work as we go along so I am going to post the steps as I do them here.  The picture she's chosen and already prepared for us is this pear.

Do you want to try out some colored pencil drawing.  Grab your pencils and join in.  Go to her blog I've linked for you above and let her know.  Ready?  Let's go!
Posted by Timaree at 8:32 AM 3 comments: 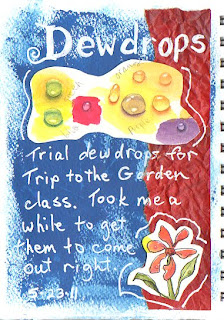 I was practicing dewdrops for a class I am taking with Laure Ferlita.  This one is a Trip to the Garden and she might have a second one coming up.  These seemed pretty hard at first but are fun once you get the hang of it.  I resorted to a magnifying glass when I tried the teensy tiny ones on the flower you see at the bottom of the Dewdrops page!

The other page was simply boredom last night and a desire to do a bit of practice with my Pentel Pocket Brush Pen.  I played it loose and fast both with the pen and the subsequent watercolor.  This is in a Strathmore journal filled with drawing paper so it's not really made for the watercolor.  I think it worked fine as I got in some drawing practice and painting practice but I also found out this ink doesn't dry quickly on this paper.  I had several minutes between drawing and painting but my ink still smeared.  It didn't matter so much with this page but it could on others. 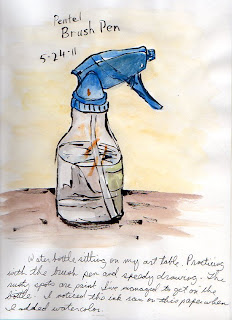 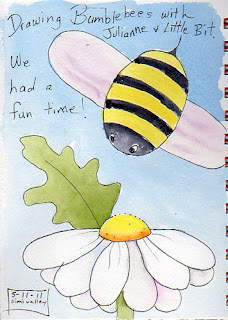 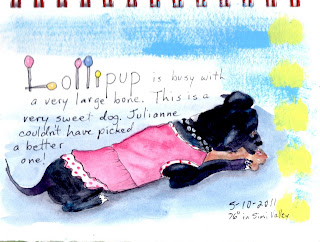 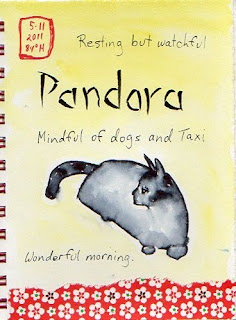 I am back home from California. My Skoshi dog is doing fine now that the blockage is gone from her intestines and I am catching up on blogging and some painting.

The bee picture was done because my youngest granddaughter has moved beyond truly loving all animals to including some of the insect world. She likes bees now even though her sister and a friend have both been stung recently. There is an avocado grove on the hill behind their house and the owner imported bees which have decided this granddaughter's swimming pool is a good water source for quenching their thirst after a hard day pollinating trees! Anyhow, I told her I'd show her a quick way to draw a bee so she and one of her sisters grabbed their composition book journals and we drew bees and daisies. They did a great job and I wish I had thought to scan in their versions but then again, this youngest granddaughter wouldn't have allowed me to share anyhow - she is beyond shy.

With nothing to do one morning while all the kids were doing schoolwork (being homeschooled), I drew one of the family dogs. This little dog is a rescue dog. She's perfect for my granddaughter and was dressed up in such a cute little dress. I had to try drawing her. Painting her was a bit more difficult but I think I got the gist of her down.

The last pic is of my Pandora kitty. She was sitting this morning, where she could see me, the dogs and the canary, Taxi. I thought she made a simple shape the way she was lying down so grabbed a Tombow pen and quickly drew her. Good thing I was being quick because no sooner than I began and she up and took off for a better spot leaving me to finish without my model! With this pen I just had to add a bit of water to have the essence of a painting. I thought it looked like a Chinese or Japanese sumi ink painting so I added a bit of origami paper and made my date look like one of their little stamps. The writing is a bit of haiku (minus the word Pandora) I made up for the page.

Now I have to catch up with some lessons I am behind on. Hope you all have a good day.
Posted by Timaree at 9:25 PM 5 comments: 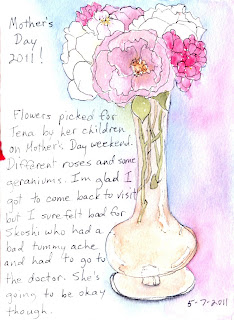 Happy Mother's Day to all you mothers out there!  Hope you have a wonderful day.

We celebrated yesterday as everyone but my mistress are going to Disneyland today.  Mistress says that's fine with her as she'd rather spend the day with just us dogs for a change.  No people unless she decides to go out somewhere to eat.

The girls picked such lovely flowers it was a shame not to try drawing them.  The scanner lightened the picture quite a bit but we can only do a basic scan with no adjustments since it's not our scanner (don't have the software to do all the adjusting).  The vase was on a brownish table so I painted what I was seeing and should have painted that part to how I was going to have the background on my paper which is good to learn if I want to make pictures that aren't journal entries.  No pencil was used here; it was straight penwork and then painting.

We are having a good visit even if it was due to Skoshi (one of Mistress' other dogs, a shih-tzu) having a stomach blockage from swallowing a rawhide chip.  She was rehydrated, given barium and lots of xrays but not the surgery we thought she might have to have.  We are all relieved but now we don't get to chew on the rawhide strips anymore.  I hope Mistress finds something else yummy for us to chew on.

Note by Timaree:  I know Roz's International Fake Journal Month is over but Mitzi hasn't filled her small journal so we will continue till it is filled.  Besides, it's fun!
Posted by Timaree at 6:38 AM 2 comments: 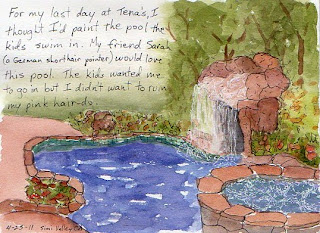 Some days were cloudy and cool, some were cloudy, cool and rainy and some days during my trip to California were sunny and gorgeous.  This was one of the sunny days.  Mistress' son-in-law was kind enough to sweep the spider webs off the chairs by the pool so she could sit and enjoy the sunshine.  She thought it was too sunny and wished she'd worn a hat but I enjoyed all that sunshine. 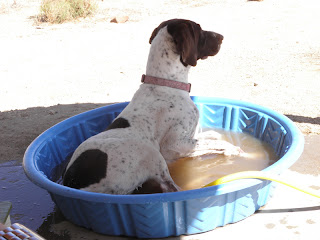 The kids decided to go swimming but weren't in too long.  A sunny day doesn't mean overly warm when a cool breeze is blowing.  The kids enjoy sitting in the spa and then jumping in the pool straight from it.  That's a bit too high a jump for me; I prefer the wide shallow steps at that far left corner in my painting.  The pool was actually a deeper teal color more like the tile work but I wanted the tile to show up separately so I took what my mistress calls "artistic license" and made it bluer (the pool has a very dark teal pebble lining).  The kids enjoy the cave.  I hear a bird is building a nest inside and I wonder if I was here when the eggs were laid or hatched if I could reach it.  Wouldn't that be a tasty snack?  This is sure a fancy pool and rather larger than the one we have at home.  You can see my pal Sarah in the one we have.  A bit of a come-down don't you think?  And we certainly can't both sit in that little thing at the same time.  A dog's life isn't always easy I can tell you!
Posted by Timaree at 11:56 AM 5 comments: