As my last post said, our house in Arizona was broken into and the copper wire was stolen. Because of that my husband is staying there till we sell the house. We've moved most of our belongings to California so he went out and got a few things like a bright blue plastic gingham tablecloth for the brown folding table that is in the dining room and a cheap flatware set from Walmart. It is surprising in that it is such a colorful set. That is what I tend to go for, not him! I decided to paint the flatware in my journal to remember his choice later on.

I asked my husband to scan it in for me and he did - after he got the scanner working. It was being pretty stubborn being on wireless and my husband wasn't in the best of moods because when I tried using the disposal after dinner it made terrible noises and so to top everything off lately it seems we now need a new disposal! We go to sign papers at the realtor tomorrow putting the house up for sale so the timing was not good. Ah well, life does go on and later this will just be part of our "moving to California" story. We will laugh about it then. 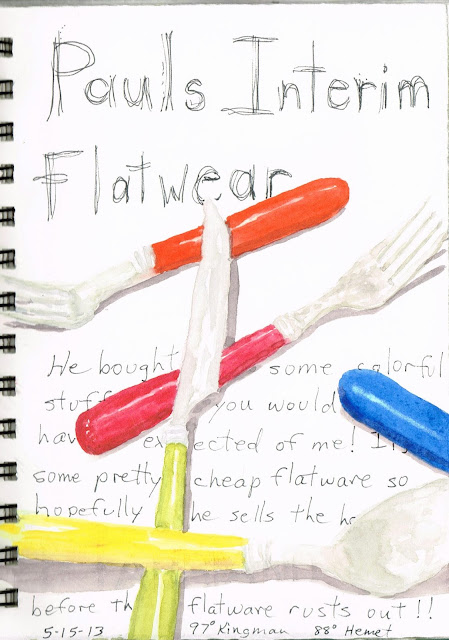 Note:The whole picture doesn't seem to be showing. Hopefully you can click on it and see it all.
Posted by Timaree at 8:40 PM 2 comments:

Lookin' on the Bright Side 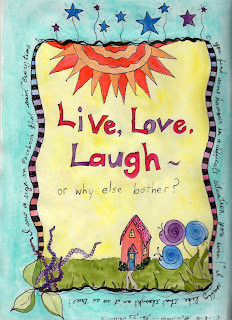 Life was pretty rosy when my husband told me to buy the California house. I've been having fun decorating it and planting flowers and a few veggies.

But, we have to deal with the house in Arizona. We went back to clear some more stuff out of it and do some cleaning. When we got there the back door was swinging in the wind and the glass was shattered. A piece of skirting (it is a mobile home) was off also. Well, we looked inside and the electrical panel door was off also. We were trying to figure out what happened. I looked around inside while my husband looked outside. The thieves (yep it was thievery) didn't take the appliances, TV, furniture or any of the stuff like generators and pumps that were in the garage and out buildings. What they did take was the power wire running from the outside electrical box on the power pole to our connection inside the house. We are all electric so that was some pretty heavy duty copper. That's all they took but by doing so they smashed our door's window and everything in the well-stocked refrigerator was spoiled (boy did it stink). My husband is staying there now until the house is sold to prevent any more of that. So yes, we are putting the house and property on the market. From a high of $350k just before the market crashed, the realtor now says we'll be lucky to get $70k on the sale! That's just over half what we paid for the whole thing! So we are having our ups and downs right now.

I am looking for the humor if I can find any and otherwise just trying to adjust, to my husband trying to "solve" the crime by deciding which of the nearby people would be the most likely culprit, to moving on with whatever comes ahead. I don't think that was a very good sentence but basically we are dealing with the stresses the best way we know how and I think this page in my journal which I started before we found the theft fits with the way I want to move forward. Bad things happen and good things happen. That's life. I want to concentrate on the good things. It seems to make all of life better! 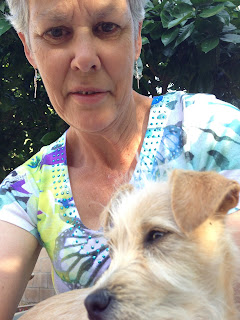 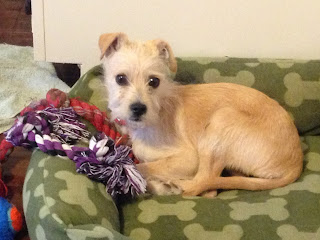 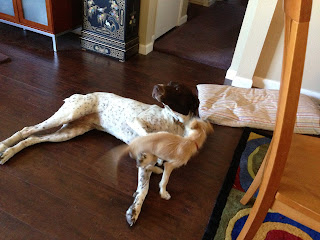 On a lighter note, this is our new puppy. I saw him on a list of dogs that were facing euthanasia very soon. I called the shelter and they said it was possible as of the next day so we went and got him. He's 4 months old and needing housebreaking but he is already learning from the other dogs. In the last pic, he found he could get the big dog to play today. She needs the play as much as the little dog does. My cat is not thrilled to say the least and has attacked a couple of times (thank goodness she doesn't have her front claws) but we are hoping she'll come around to accepting him or he'll learn to stay well clear of her)
Posted by Timaree at 5:46 PM 3 comments: