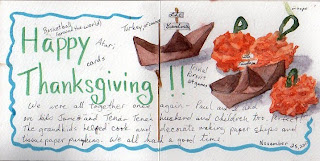 Thanksgiving arrived and now it's gone! Wow. The time sure flies. I cooked and cooked, did dishes and played many games of Trivial Pursuit.

My daughter and her family came in on Monday night. We went to town the next day for a buffet lunch but other than that, I cooked! Before anyone arrived I had made:

The next day our son came in and from there on I cooked:

It was a food filled time but we managed to play a couple of games of Around-the-World on the drawn-in-the-dirt basketball court in the cold wind and multiple games of Trivial Pursuit. The old team (my husband and I) won at least half!

My grandkids fed the goats and dogs, took out the trash, set the table and decorated it for Thanksgiving dinner, ate plenty of junk food but didn't ask for soda till the day before they left. They played the old Atari computer games and the new games on their i-pods, colored pictures and played paper dolls. The two youngest peeled potatoes, sweet potatoes and cucumbers plus chopped whatever needed chopping.

In spite of the help, I am taking a day to rest now that everyone has gone home! I painted some of the decorations the kids made and that made up my journal entry for the holiday. I should have left more room for writing!

Hope your Thanksgiving was wonderful too.