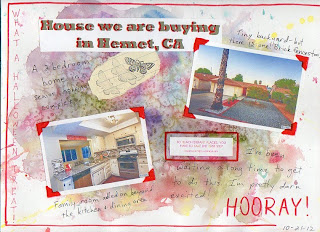 I have been waiting to do this for a really long time. My husband will probably not be as happy as he has been on this 40 acres of desert but I've had a longing to get back to California. Hemet is 1 hour from my son's house, 2 hours from my daughter's and 1.5 from a sister and some other family down in the Santee area which means I'll be close enough for family get-togethers but far enough away that I won't bug everyone to go out for lunch or dinner every week!

I couldn't believe it when my husband told me to actually go looking for houses when I was in California last time and I really couldn't believe it when he asked me if I found one and if so, to put a bid on it! He was going to go look at a couple I liked but got a really bad case of sciatica and hasn't been able to go anywhere for over 10 days now. Because of that, I just got to pick the one I wanted most and we've now got the news our offer was accepted. Geez, I am so excited.

We'll take our time, maybe up to 1 1/2 years to move (although once my husband gets started on something he usually just goes full tilt on it) completely. Maybe the market will start improving where we currently live so we can sell the house we are in okay.

I went out to California for my glaucoma appointment and had laser surgery as the pressure is just not coming down with the drops they have me on. I hope it works and will find out at Christmas time. If not, I'll try giving up coffee and see what happens. The doctor says it doesn't matter about my coffee but my son read about a study showing coffee does affect one type of glaucoma (and I am not sure what type I have) especially among Scandinavian peoples. I come from Norwegian stock and some Irish too (we know how the Norse travelled that area) so who knows, it might affect me. I don't want to give it up yet as I like it and I want to see if the surgery worked. One step at a time! I was also told I have a cloudy build-up on my lenses that replaced my real eye lenses. The doctor was surprised I can see as well as I do so I think some more laser surgery is in my future.

Not much art at all in this post but life is in flux for me as you can see. I could feel my depression lift when I realized my husband was serious about moving. I didn't think I was letting it bother me so much but guess it was.

The page I made here was started as part of a lesson months ago and I didn't know where to go with it after playing with the watercolor and gluing on the butterfly stamping scrap. I wanted to make a page about the new house (which was built in 1976 and so isn't really new at all) and this seemed made for it. So don't ever throw away a page you start but don't finish. You may find a use for it later too!
Posted by Timaree at 2:54 PM