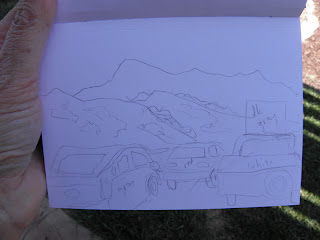 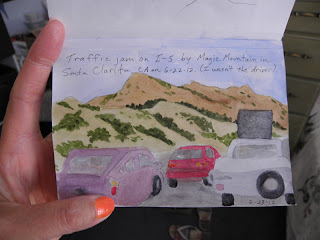 My daughter was driving her son and four of his friends to a water park by Magic Mountain. It's about 35 miles away and took us an hour to get to because of the traffic. It was a Friday and I guess lots of people were heading north for the weekend. Just a few miles from our exit off of I-5 in Santa Clarita the police shut down the freeway for about 15 minutes because a car had broken down in the fast lane. I don't know why they shut the whole thing down and I sure don't know why they finally opened only one out of four lanes once they reopened it but that's the way this kind of thing happens. At any rate, I was prepared. I had coffee, cookies and my journal! I only got the pencil sketch done before we were moving again but it helped to pass the time. I painted the picture this morning at home.

By the way, I got to go pick up the kids because my daughter had another place to be in the evening. I stopped at Starbuck's to get my granddaughter who was my co-pilot and I a nice cold drink and figured on 70 minutes driving time. It took 76! One way, for the 35 miles! No time for another drawing though as this time it was me who was driving and I might be from California but contrary to public opinion we are not crazy!

I took the liberty of making a purple car versus another gray one! Hope you are getting where you need to this weekend without traffic jams or other problems. Still, if I had my way, I'd be living here and not in Arizona where I don't have any traffic problems since I don't live in the Phoenix area.
Posted by Timaree at 4:14 PM