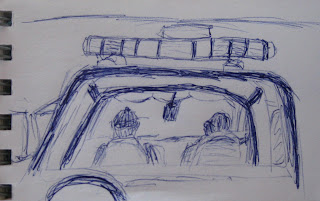 I was just over at Margaret Ann's blog where she sketched out her latest car trouble - an accident.

I just had car trouble too - so you aren't alone in this car troubles time Margaret but I'm glad ours was less dramatic (traumatic?). I didn't sketch our old Ford Escort but after the tow truck came we found only one of us would fit in his truck cab so I got to ride in our car while it was chained on top of the flatbed! What fun - and I have a phobia with moving vehicles which didn't help at all.

So what's a girl to do finding herself in what feels like a precarious situation worrying she'll flip out with her phobia? Draw the situation! At the risk of getting carsick (which is far better than a panic attack) I pulled out my pad and pen and drew this sketch. It's not good I know. How can it be when I was bouncing and shaking so much I could hardly keep the pen to the paper? (Besides my less than stellar drawing skills). Anyhow, this is the view from the driver's seat (yeah, I sat there just in case the car got loose and fell of the truck - well, it helped me feel a tad of control) of my car looking into the cab of the tow truck. It helped. I made it home with having a panic attack and only started getting car sick as we hit the dirt road leading to home.

I wish my husband would get rid of this 15 year old car but he likes it for the dirt roads to save our new one for trips to California. (Now, if John McCain would have brought some of the pork home to Arizona, maybe we wouldn't have so many lousy dirt roads! Other states were getting extra money for roads while he so righteously refused it for us but that's a whole different topic).

Hope you get your car fixed again real soon Margaret Ann.
Posted by Timaree at 8:17 AM